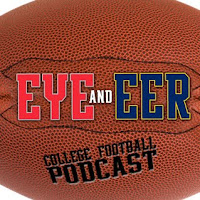 Probably not much, but after nearly 20 months of blogging here we have decided to move off the Blogger site and go over to the FanVsFan platform. We're hoping all of you will follow us and continue to offer us your thoughts and feedback. If you want, join the FanVsFan network and read the features and articles posted by the many outstanding resources that are available there. 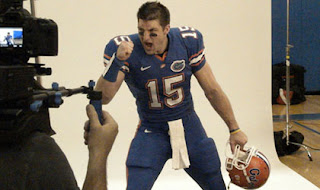 What's possibly the least surprising news of the day, Florida's Tim Tebow will grace the cover of EA Sports' College Football 2011 video game. According to the Gainesville legend, he's been a fan of the game since he was 6 and he's darn proud to be on the cover.

WVU may be one of the final programs to begin spring practice, but WR Jock Sanders was in mid-season form when meeting with the media.


You gotta love it when Noel Devine pops in for a little love during the interview, and Sanders is really into the Batman and Superman reference. How long until HC Bill Stewart Tweets about this?

Since Phil and Tom had already completed yesterday's podcast before reading the news about Mike Bellotti's departure from Oregon, and the surprising news that OU President Richard Lariviere pushed him out the door because the Ducks Athletic Department was not being run properly, they got together again to briefly discuss this topic.

OK, so we're a little late with the podcast. But it was worth the wait.


Let's not forget our Quick Hitters.

Enjoy another show.
Posted by 'Eer at 2:02 PM No comments:

There is no way the 'Eye would be happy if Tony Barnhart's outlandish speculation comes true. I'm in no position to question Barnhart's sources or his own instincts when it comes to seeing into the Big Ten's future.

The scribe is one of the best college football guys around.

But does it make sense for the Big Ten to make the leap from 11 to 16 teams? Barnhart seems to think so. It would play well into B10 commish Jim Delany's ego as it has been rumored that this is his way to put a final stamp on his legacy.

Of course Barnhart's fact/fiction has the B10 raiding the Big East of Pittsburgh, Syracuse, Connecticut and Rutgers. The fifth and final addition would potentially be Notre Dame. This would all but doom the football sect of the Big East, and relegate West Virginia, Louisville, Cincinnati and South Florida will either be left for dead or hope the ACC or SEC scoops them up in an effort to not fall too far behind Delany's dream conference.

More realistically, the four remaining Big East teams would find a home in lesser conferences or try their best to salvage what's left by seeking new members from Conference USA and elsewhere. But maintaining BCS status will not happen.

The SEC doesn't need to overreact, but instead of taking what's left of the Big East it could look at adding Miami, Florida State, Clemson or even Texas.

All of this seems a little crazy, but remember what WVU's Bill Stewart said not too long ago, and Tony Barnhart wouldn't just throw out this crazy plan without some solid information. Right?
Posted by 'Eer at 9:56 PM No comments:


Brian Kelly will never admit it, but he's trying to accomplish two things by publicly undressing his players during spring drills.

Let everyone know that Charlie Weis ran a loose ship and discipline was not high on the former Irish coach's list.

Provide himself an alibi when the Irish finish 6-6 again (or allow the ND brass offer him a guaranteed 10-year deal when they reach a BCS Bowl).

To be completely up front, this is typical of Kelly. Watching him in the Big East the past few years this is exactly the way he approaches a new job and I believe he will be extremely successful within three years in South Bend. 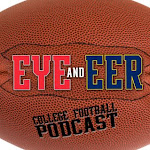 Other places you can find us